Prague celebrates the 700 years since the birth of Charles IV. The aim is to raise the celebration to the national phenomenon into which important Czech institutions, significant towns, and regions will engage.

The celebration of the national anniversary and the event which are linked with them have the target to increase the general awareness about this personality and his contribution to the country in cultural and also in economical field. At the same time we want to increase the perception of our most significant king as the key person for the whole Europe of the 14th century.

The main aim of the organisation

The focus is on the diplomatic skills as the counterweight to the aggression and wars. The whole project wants to make the Czech Republic visible in Europe as the country with deep and strong European tradition with the relation to timeless traditions.

Father of the homeland – Charles IV

The organisation Father of the homeland Charles the Fourth, z. s. is the initiator of the whole scale of actions and project connecting to this important anniversary. The organisation is the member and at the same time the initiator of the provision of the National committee for the arrangement of the anniversary and together with the representatives of important institutions the depute of the organisation signed the declaration to the 700th anniversary of the birth of Charles the Fourth in the main hall of the Valdstejn palace.

The legacy of Charles IV

The anniversary is suitable point in time for us to enter for legacy one of the most important ruler – not only the Czech one, but even the European ruler. His effort to make peace is more than vivid at the moment.

The best way to know Madrid: on Segway 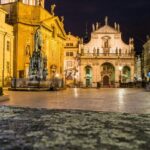 Prague – one of the most favourite cities in Europe