The Prague Castle is the place of interest and belongs to the most representative places in the Czech Republic. So the Crown Jewels in St Vitus Cathedral are being kept in here and they are exclusively displayed in the Prague Castle. However, these occasions are really rare (usually once in five year). The President of the Czech Republic has the right to decide on the display of the Crown Jewels.

Crown jewels under the lock in St Vitus Cathedral

They are permanently kept at the least accessible site at the Prague Castle in the Crown Jewels chamber in St Vitus Cathedral – they are locked in here and there are seven holders of the keys: the President of the Republic, the Prime Minister, the Prague Archbishop, the Chairman of the House of Deputies, the Chairman of the Senate, the Dean of the Metropolitan Chapter of St Vitus Cathedral and the Lord Mayor of Prague. They all must be present with their keys to open the lock. The tradition of seven keys is in existence since 1791 when they returned back from Vienna. Crown jewels cannot be expressed in term of money as they perform the priceless historic value and at the same time they stand for the symbol of the Czech statehood.

The set of Crown jewels in St Vitus Cathedral

St. Wenceslas Crown is made of extremely pure gold and this is decorated with precious stones and pearls. St. Wenceslas Crown belongs to the oldest thing of the Crown Jewels. Charles IV let made it for his coronation in 1347 and he adored it to the patron saint of the country, St. Wenceslas.

Sense of safety for everyone – Safety First! 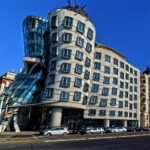