Vaclav Havel ( Czech pronunciation:[ˈvaːt͡slav ˈɦavɛl] ) was born in 5 October 1936 and he dies in 18 December 2011. He was a Czech essayist, poet, playwright, philosopher and dissident, and last but not least statesman.

Havel became very popular as the world’s playwright. He wrote in the absurdist style and to the most famous plays belong for example The Memorandum and The Garden Party which are the criticism of communism. He was active in Prague Spring and for this reason became blacklisted after the invasion of Czechoslovakia. He was politically involved such as in Charter 77 and the Committee for the Defence of the Unjustly Prosecuted.

Vaclav Havel was very popular at home and abroad as well for his anti-consumerism, humanitarianism, civil activism, direct democracy, and environmentalism. He received several awards, such as the Presidential Medal of Freedom, the Gandi Peace Prize, the Philadelphia Liberty Medal, the Order of Canada, the four Freedoms Award, the Ambassador of Conscience Award and the Hanno R. Ellenbogen Citizenship Award. 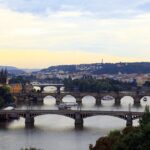 Next 3 things to do in Prague