Old Jewish Cemetery in Prague stands for the most spacious Jewish cemetery not only in the Czech Republic, but in the whole Europe too. At the same time this is one of the most significant Jewish historical sites in the city. It is not in use; however, since the first half of the 15 th century to 1786 it used to serve for its primary purpose.

Well-known personalities are buried in here, for example rabbi Jehuda Liva ben Becalel who is also known as Maharal (who lived between 1526 and 1609) or famous businessman Mordecai Maisel, historian David Gans or rabbi David Oppenheim. In these days the monument is administrated by the Jewish Museum in Prague.

Old Jewish Cemetery – Old but not the oldest one

The history of Old Jewish Cemetery goes back to the 15 th century, however, it does not makes it the oldest one in the capital of the Czech Republic. The older Jewish cemetery was called Jewish Garden and was located in the site of today’s New Town of Prague. This oldest cemetery was closed during the reign of King Wladislav II Jagello in 1478 and disappeared when New Town was built.

The cemetery was in use for about three centuries it suffered from the lack of space. Because of piety or respect to the ancestors the Jews did not damaged the old graves. And as the Jewish Community was not able to purchase grounds for many times they did not have available place. For this reason there are sometimes about twelve levels of buried people in here. There is also a huge number of gravestones which can one see today. And this also explains why the soil had been raised many meters higher than the place which surrounded the cemetery. 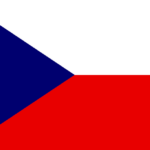 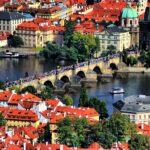 Where is Prague located? Geographical facts about the Czech Republic