Kutna Hora is the city located in the Central Bohemian Region which is in the Czech Republic. Kutna Hora was settled in the 12th century by the Cistercian monastery in Bohemia. By1260 German miners mined for silver in the mountain of this part of the country and thus the area was named Kuttenberg or Kutna Hora in Czech as mining is kutání in old Czech language. As the silver belongs to the precious metals tha town became very rich and the importance of Kutna Hora was immense in the 13th century.

Silver was found also in the 10th century and silver dinars were discovered during 982-995 in Malín which is the part of Kutna Hora. Thanks to the mining code by King Wenceslaus II of Bohemia in 1300 Kutna Hora developed even rapidly and during the Hussite Wars in the early 15th century it became the favourite residence of some Bohemian kings. In 1409 Wenceslaus IV declared Decree of Kutna Hura in which the Czech university nation had three votes in the elections to the faculty of Prague University against other three nations.

For the wealth and for the power Kutna Hora was economically, culturally or politically important town which was the second most important after the capital of the Czech kingdom – Prague (this sovereign position lasted since 13th to 16th century). Since 1995 the city centre of Kutná Hora has been a UNESCO World Heritage Site.

The neighboring town Sedlec is a UNESCO World Heritage Site too. It is the place of the Gothic Cathedral of Our Lady and the world-known Ossuary. It stands for a small Roman Catholic chapel which is under the Cemetery Church of All Saints in Sedlec. There are about 40,000 people bones. They are artistically put to make the decorations and to furnish for the chapel. 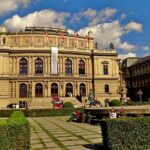