This term: Prague Spring 1968 is commonly used for the brief period of time when the government of Czechoslovakia which was led by Alexander Dubček wanted to democratise the Czech nation and lessen the power that Moscow had on the nation’s domestic and foreign affairs. The Prague Spring culminated with a Soviet invasion, and also the removal of Alexander Dubček (who was taken as the party leader). This was the end of reforms in Czechoslovakia for a long time.

The first hints that all was not well in Czechoslovakia occurred in May 1966 when there were complaints that the Soviet Union was exploiting their people.

In June 1967, the open criticism of Antonin Novotný  (the Party Leader) occurred at the Writers’s Union Congress. In October 1967, students demonstrated against him and soon after this Novotný( in 1968) was replaced as First Secretary of the Party by Alexander Dubček.

Dubček promoted the Czech Communist Party as the predominant party in Czechoslovakia. However, the totalitarian aspect of the party should be reduced.. Even though Dubček assured Moscow that Czechoslovakia will be a part of the Warsaw Pact in the future, the Soviet leader Brezhnev sent the Warsaw Pact troops on 20th / 21th August that invaded Czechoslovakia in Prague Spring 1968. This was an act of disapproval of what Dubček had done in Czechoslovakia (the troops consisted of Polish, East German, Hungarian and Bulgarian troops).

Unfortunately, the Czech military had no ability to face such an invasion in Prague Spring 1968. The Dubček’s reforms were cancelled. He and other politicians was arrested and transported to Moscow. In Moscow he was told what to do in Czechoslovakia and he was sent back to Czechoslovakia. He announced that all reforms are ending.

The Prague Spring 1968 showed that the Soviet Union are not willing to contemplate any member of the Warsaw Pact leaving the pact. 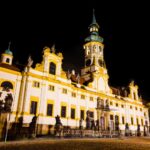 Private Segway Prague Christmas tours only for You